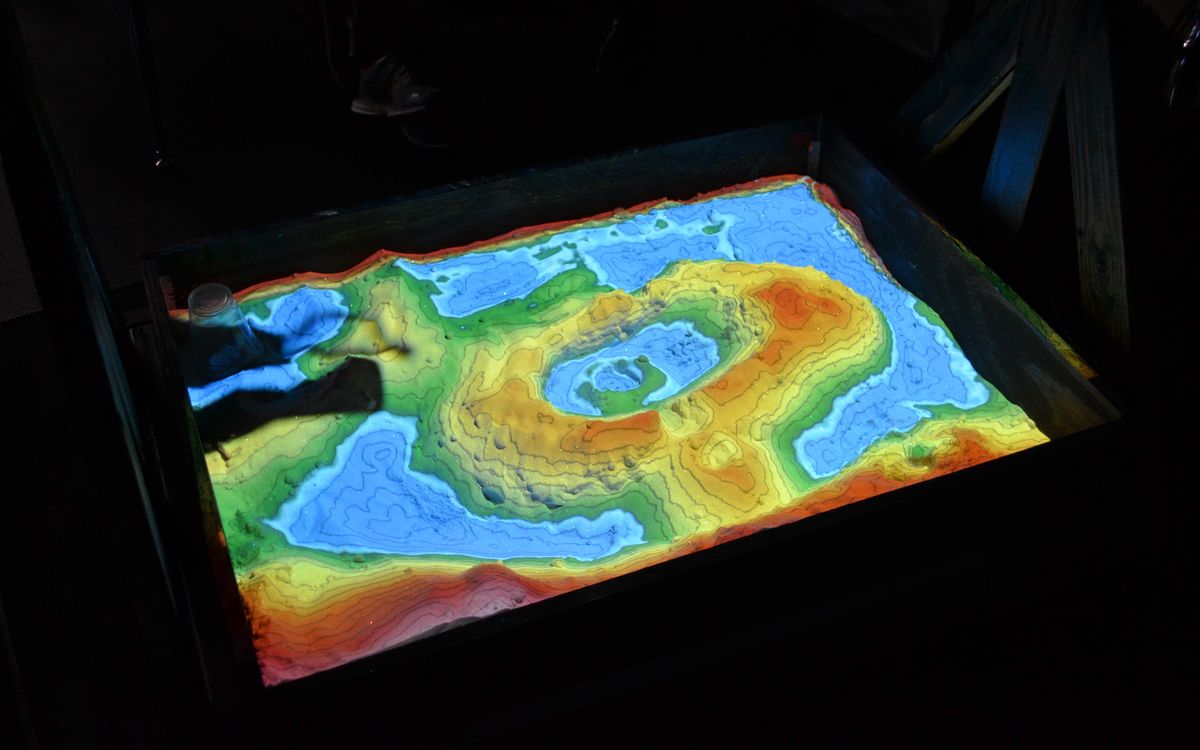 For Rob Dominguez, Altamont's Director of Education Technology and 7th grade geography teacher, an augmented reality (AR) sandbox is the perfect amalgam of his work with students. An AR sandbox is a 3-D visualization tool that teaches geographic, geologic, and hydrologic concepts by allowing users to create topography models by shaping real sand. A literal sandbox is augmented in real-time with an elevation color map, topographic contour lines, and simulated water using a 3-D camera, powerful simulation and visualization software, and a data projector.

"I saw an AR rig about two years ago and thought it would be a pretty lofty goal to have one at our school," said Dominguez. An upper school Fall Project Week trip to the Silicon Valley that he co-led last fall changed his mind. "After seeing how engaged our students have become since our trip to Silicon Valley, I thought it would be not only possible, but fun to enlist some of them to help build our own AR sandbox. And the students were ready and eager."

The typical cost of purchasing an AR sandbox runs between $6,000 and $8,000. Mr. Dominguez and his Altamont team built one for less than $300. Most of that cost was in the sand. "Our director of technology donated a projector, the history department paid for the wood, the director of finance chipped in for the sand, the software is open-source, and the camera was purchased by an anonymous donor. Altamont also took advantage of on-campus brain power, borrowing engineering, construction, and software know-how from facilities director Jon Vann, physics teacher Katrina Dahlgren, and computer science teacher Ryan James.

Working under Mr. Dominguez's close supervision, Altamont 11th graders Henry Chang, David Niederweis, and Hampton Walker helped physically construct the rig. They also played a lead role in setting up the software and calibrating the equipment. "I wanted to make learning geography easier and more fun for students, especially those in middle school," said Walker. "The AR sandbox project expanded my knowledge of coding and helped bring a positive learning atmosphere to the school."

Dominguez echoes that sentiment. "The sandbox is a great example of the Altamont experience coming full-circle; students, who once were in my class as seventh graders now helping to enrich the education of younger students while simultaneously gaining knowledge in computer science."